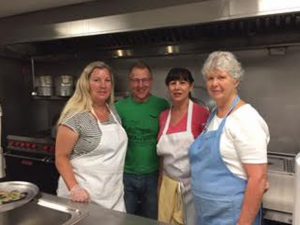 Many of us have a desire to “give back” to the community, but we sometimes don’t follow through or procrastinate waiting for an opportunity. Not Len Rand. He jumped in with both feet because he wanted to combine what he loves doing with what needs doing.

“I love to bake – especially bread and desserts – and I wanted to share these baked goods with local charities who needed them,” Len said. That’s the part where Len combines what he loves doing (baking) with what needs doing (feeding hungry people). But because he wanted to give more than just the occasional loaf of bread or two dozen cookies, he had a commercial kitchen installed in his home. That’s the jumping-in-with-both-feet part.

When Len arrived at ICS one morning to donate loaves of bread that he had made the previous day, he met some guests and staff members and talked to Joe Jordan-Berenis, Executive Director. As conversations go, that one led to Len learning that someone was needed to cook for the noon meal on Tuesdays. It wasn’t baking, but Len understood that it needed to be done. Now he comes every Tuesday morning.

Often Len arrives at ICS and doesn’t know what is in the refrigerator or the pantry. “It’s like I’m in an episode of the Iron Chef,” he laughed. “I wait to see what do we have and what we can do with it.” Lucky for the guests, this doesn’t fluster Len. With the help of other volunteers and Ben Medina, staff kitchen manager, a delicious meal is served three hours later to an average of ___ guests.

Len and his wife, Barb, came to Santa Fe to retire via New York and San Francisco but left retirement to become the CEO of xF Technologies in Albuquerque.

And what about his love of baking? Len still bakes at home and brings bread and dessert with him on Tuesdays. Doing what he loves with what needs to be done.